As is known to all, high-rise fire has the characteristics of fire spreading, evacuation difficulty and difficulty to save, and it is difficult to control and escape because of the complex structure and dense staff of tall buildings."Bayi army day" of ningbo city fire department specially organized a high-rise fire rescue test, under the ideal conditions, heavily armed foot on 20 firefighters wearing a reflective floor need 4 minutes and 16 seconds.

Firefighters dress finished, the outside temperature is about 37 ℃.The researchers put a weight test on one of the firefighters named zhang zhan, who weighed 68.7 kilograms before he was dressed.Armed with a reflective strip of fire clothing and equipment, the weight reached 103.9 kilograms."There are 25 floors in this building, 79 meters high, and it's assumed that there will be a fire at 20 meters and people will be trapped on the 18th floor."East new town squadron mid-team leader Yang Xi says, this test is the test of physical strength and stamina, firefighters to wear heavy tiger fight, back more than 35 kg of equipment, foot on 20 floors, the use of indoor fixed fire control facilities for early fire fighting and rescue.The test was also a wake-up call - ideally, firefighters would need 4 minutes and 16 seconds to get to the scene, which is not a waste of time, and must learn to save themselves.

Of course, remember the first rule of fire escape: get out of the fire as soon as possible and never return to the fire.After the fire escape, stop thinking about the items left in the house and go back to get them.If the fire fire escape hard phase, do not blindly jump off a building, all the doors and Windows should be closed the door, prevent air convection, delay the speed of flame spread, waiting for the firefighters came to rescue in their reflective clothes. 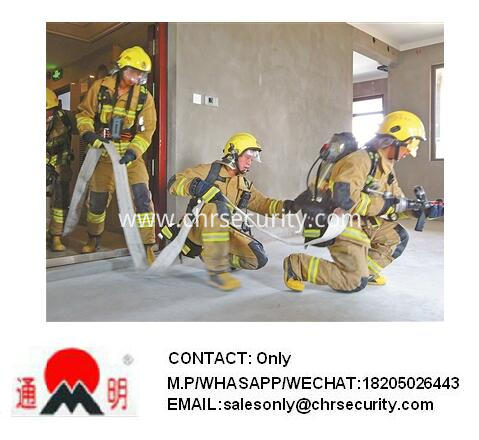 Ms. Only
What can I do for you?
Contact Supplier